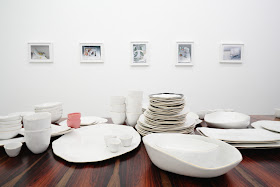 8:00 PM, Friday, January 31, 2014: On the floor, in the center of the room, is a rather low, long, folding, wood-toned dinner table.[1]  Stacked heavily upon that table are many glossy white ceramic dishes which, because their irregularity, seem to be hand-wrought.[2]  At first glance, the cumulative effect of the presentation recalls William J. O'Brien's artfully-glazed yet primitively formed clay works at Marianne Boesky Gallery and The Renaissance Society.  On the wall, around the perimeter of the room, are hung small, framed prints.  Looking closely, these two-dimensional works are revealed to be scanned reproductions of collage.[3]

Nothing in the scene just described has the effect of suggesting the work for which Laura Letinsky is best known: photographic depictions of meals on linen after the manner of some still life painter from the Dutch Golden Age, e.g., Pieter Claesz, Jan Jansz van de Velde, Willem Claeszoon Heda, et al.[4] 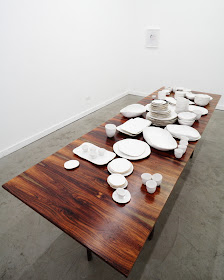 And while the press release for the show wants to remind us that Letinsky's involvement with ceramics began five years ago, it's still a bit of a shock to find a display for the sale of pottery (the pieces in the gallery are meant to advertise her wares for order from a factory in Mexico) at the heart of her show.  In form and in function too it is very much like a presentation from Crate and Barrel. 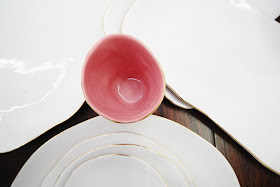 Nevertheless, it's intriguing.  And one wonders why, exactly two years after the Smart Museum offered us free food in "Feast: Radical Hospitality in Contemporary Art," we're now presented with empty dishes for sale.  Photographer Nick Albertson's concurrent exhibition at Aspect/Ratio, less than one block away, begs the same question; Letinsky isn't alone here. 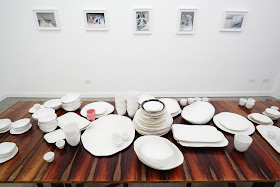 Maybe it's good to remember that Theaster Gates, Letinsky's fellow faculty member at The University of Chicago, was trained as a potter.[5]  Maybe it's good to remember that Michael Rakowitz appropriated Saddam Hussein's dinnerware.[6]  Nevertheless, one wonders why divergent factions and theories are made to support convergent practices in Chicago, at this moment, and too whether the impetus for such movement originates with the artists.

[1] The table in question was said to have been supplied by photographer Jessica Labatte's partner: Chef Eric May.

[2] Why not accept that well-formed pottery, like perfectly round wheels on a car, functions best?  Why not contest prevailing standards of beauty in the glaze?

[3] Pictures of food, and not food itself, appears in the collage, I think.

[4] An example from the Spanish Baroque, e.g. Juan Sanchez Cotan, would too have been accurate--but lacked the Dutch connection to commerce.

[5] Gates has earned Bachelor's and Master's degrees in Ceramics.

[6] Rakowitz appeeared in "Feast: Radical Hospitality in Contemporary Art," alongside Gates and Letinsky.